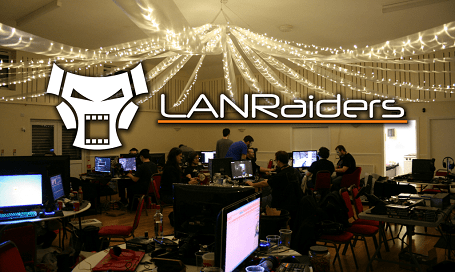 Back To How It Began – What’s back for LANRaiders J20

We’re celebrating our tenth anniversary at LANRaiders, and that gave us pause for thought:
LANRaiders hasn’t changed much from its very first event… We’ve enjoyed a loyal and close-knit member base that’s been the driving force behind consistent and regular events- but it also meant that we became somewhat complacent. What do we want to bring back? What needs more focus again? How are we going to develop the J-Series and bring it into the modern age of gaming?

A big part of any LAN party is a showcase and discussion of PC builds and setups, a pastime that’s been somewhat diluted by the round tables we use. Having to put your PC on the floor sucks for a lot of reasons- so we’re bringing back the Trestle Tables.
Not only does this mean you can have your rig desk-top again, but it also means you have better communication with the rest of the hall- no more table cliques where we fall into groups of four, each player games on our own.

Some of the most memorable LANs we’ve run and their high-points have been game tournaments. These have been making a comeback in our last few events, but now we have a fresh new method of keeping everyone in the loop with what’s going on. Our new LANager setup will mean there’ll be a screen visible at all times showing tournament statuses, or what games we’re currently playing. This makes it much easier for people to team up and play together, without having to do the age old town-cry of “Who wants to play XYZ? Anyone?!”

Notice how we don’t have many photos or videos? Yea we noticed that too…the best moments at a party are fleeting, and often end up in ‘You had to be there…’ stories. But the advent of streaming and recording means that we can now capture the best bits and keep them online for everyone to enjoy. We’ll have full recording setups at J20 to capture every bit of the action- epic wins and edge-of-seat tie breakers will be saved for the ages!

Get your tickets booked today, and jump on the LANRaiders bandwagon just as we’re stamping on the gas pedal!