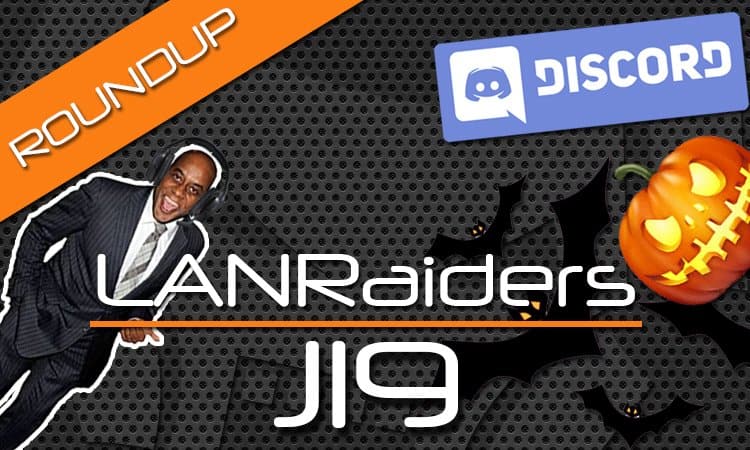 Thank you to all of our J19 attendees – we had another great event over the Halloween weekend!

Along with a bit of new networking tech, this event we used Discord as our go-to choice of voice and chat comms and which provided a great place for our attendees to chat and arrange games. To go hand-in-hand with this, we had also been provided with some swag courtesy of the wonderful team at Discord, and so our attendees were provided with badges, stickers and cards along with the chance of grabbing a T-shirt during our Sunday Raffle!.

After a bit of an initial hectic set up period, We kicked off this LAN in style with “Tech support Ainsley” greeting players as they entered, putting a smile on our attendees faces. A few hours of casual gaming later, It was time for the first of our tournaments at 9pm on the Friday night – Sega bass fishing…Whilst using boxing gloves.  We had previously run a Sega bass fishing competition which was a great hit with our community, so we decided to put a spin on it and make it a bit more challenging, with players having to use the fishing controller whilst wearing boxing gloves. First prize for winning was a trophy, along with extra tickets for the Sunday afternoon Raffle. Following on from this we had a few more hours of casual gaming (along with a few card games for good measure) to round off the first day.

Saturday morning quickly came around, and at 10am it was full speed into our next tournament – 1v1 Soldat. This is a free side-scrolling multiplayer shooter which the whole event could play and enjoy. After a few close fought battles a winner was declared, winning a customized set of J19 dog tags, as well as extra raffle tickets. After lunch it was time for our RTS tournament, and what better to plan than the classic Command and Conquer: Red Alert 2! a few easy victories, as well as few tough battles later we eventually found a champion – winning a custom T-shirt (along with a runners up t-shirt). Following straight on from the Red Alert 2 tournament, we went straight into our Street Fighter tournament, which was live streamed via our Facebook page. Check it out below at the bottom of the post!

Holding an event over Halloween gave us the chance to get dressed up, and so to finish off the Saturday a trip was organized to head down to the local pub for a Halloween party.

After a few more hours of casual gaming on the Sunday, and to round off the weekend as is now tradition, we ran our Sunday raffle – with prizes including Steam vouchers, steam controller, steam link, a VR headset, Discord t-shirts, mouse mats, gaming peripherals and accessories. Following this it was time to wind down for another event, as participants started to head home. So began our packdown and planning for J20.

We would like to thank Discord again for providing us with giveaway swag for the weekend as well as a VIP server (even our Ainsley cut-out couldn’t resist grabbing a t-shirt!)

If you still haven’t joined our voice & chat community on Discord then head on over to https://discord.gg/lanraiders